Closing ceremony of the 2nd International Open of Veterans 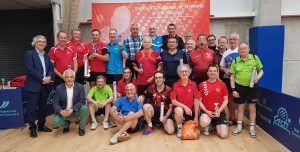 Salou has been between days 18 and may 21, the setting for the second edition of the International Tournament Veterans Costa Daurada. The event, open to players and players from 40-year-old, brought together Seventy participants from twelve different countries, redundant so the trend that the tournament because he scored last year in Reus in its inaugural edition cover, in from a participation measured a wide diversity. In addition to Catalan and Spanish paddlers, the tournament has had players and players from France, England, Russia, Italy, Wales, Austria, Israel, Sweden, Portugal, Latvia and Japan.

Also for the second year in a row, the Open has fulfilled the main purpose am I was born, to offer a proposal that had the assets of the sport and of tourism and of the participation in the tournament the best excuse to enjoy a few days on the Costa Dorada or , conversely, had the attractions of this coastal area of Tarragona, the option to participate in the tournament of table tennis.

For this reason, the competition program was designed with the aim of reconciling the turns of the game in the Sports Hall Salou-Speaker with spaces of free time so that participants could enjoy your stay on the Costa Dorada.

Once held Friday afternoon at the Hotel Piramide Salou the welcome reception to the participants, during Saturday, Sunday and Monday morning were contesting the eleven tests that finally they settle for the competition program, structured in four age ranges, although in some cases merged categories and, in the women's double, was held a tournament only open to all couples regardless of age. They also played in seven tests of consolation.

Among the individual events and the double main boxes, up to seven players and players with license of any club table tennis Catalan rose to the highest place of the podium, he saw go for seconds and third place more than twenty Veterans and Veterans of our House.

The awards ceremony Monday at noon, with the presence of the representative of the Catalan Sport in the Tarragona area, Joan Plana, and first Deputy Mayor of the city of Salou, Marc Montagut, in addition to the President of the Catalan Federation of Table Tennis, Joan Arnau, and Vice President Juan Carlos Virgili.

The Organization of the tournament has been in charge of the FCTT, with the support of the city of Salou, the Tourist Board of the town and the General Secretariat of sports of the Government of Catalonia.

See the complete results and podiums of the tournament